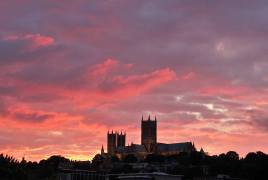 What's it All About?

Well, it's about as much of My Family, My Friends, My Life and its Events, as I can recall and cram in . . . .
On this website I introduce myself, 'The Toynes', my family and their lives, as well as my life and our photographs from more than 70 years - 40 of them hiding in the shrubbery . . .

THEN: A Life in Horticulture

Gardens, Plants, Techniques, Styles, Features, Wildlife - Good & Bad -  and Ideas . . . this is where you'll find my latest photos to look at and use. Yes, USE!

I look forward to reading your comments in the 'About You' (that's 'you' NOT me!) and 'Get In Touch' Sections!

Thanks for Visiting Folks! How's about telling us something about your life in the 'About You' Section or leaving a message in 'Get In Touch'?

Have a Look at the Toyne Family Tree:

For several years I have been putting together a Family Tree for our Branch of the Toynes in Lincolnshire and elsewhere in the world (I have two children and further offspring in Australia and Glenna has umpteen cousins in America) - However, I must admit to being neither very good nor very consistent in my efforts and have resolved to look elsewhere for information and history than just the Web! Time permitting, I'll put this into practice soon . . .

Recommend this page on:

My name is David Toyne

I originally come from Lincoln UK, the County Town of Lincolnshire in the East of England and currently live in Ruthin, a small Market Town in Denbighshire, North Wales

Hobbies: FAMILY, Plants, Botany, Horticulture, Gardening, Wildlife,Travel, Reading, Photography and Writing (I am currently on something over 70,000 words of my Family Autobiography)

My Mother was Rose (nee Fleetwood) and my Father, Richard - both born in 1899.

I was born in Lincoln, Lincolnshire on the 25th August 1942, (at 9.10pm) and spent the first 16 years in Geneva Avenue, in the St Giles district of that smallish town - followed by just a couple of years in Ingleby Crescent on the Ermine Estate. I had 8 bothers and sisters, 4 of each  - more of which later

In 1959 I left The Lincoln School (now Christ's Hospital School) on Wragby Road, at 17 years old, with just 3 'O' Levels (French, Englisn and Handicraft) and worked for a year in the City Engineer's Department, at their Stamp End Depot, with Liz and two delightful bosses whose names were Ted and Will.

However, I had always wanted to be a pilot in the Fleet Air Arm, and took the entry exam and the medical (both passed) but needed Maths. So I tried to get Maths at 'O' Level three more times before giving up and joining the Merchant Marine . . . as an Assistant Steward (a far cry from the aeroplane pilot I really wanted to be . . . )

My first Ship was the MV Gladys Bowater (of Bowater Scot - toilet tissue fame) where I 'worked by' for a weekend with a skeleton dockside crew before signing off, collecting my (free) Travel Warrant and travelling back home to Lincoln . . .

My next ship was the MV Clyde Sergeant on which I was destined to spend the next 10 months, traveling up to Aalborg and Fredericia in Denmark, then down to Ceuta in the, then, Spanish Morocco, across to Gibraltar and then on to  Malta and Cyprus before sailing through the Suez Canal to Arabia and India for the next 6 months. More of which I will recount in detail as part of my life story elsewhere in this  'document'. . . .

To cut a long story short, for the time being, I spent almost three years travelling the world, becoming familiar with India, the Maldives, Saudi Arabia, Iran, Lebanon, Syria, Egypt and the East African coast before calling it a day and taking up a job in photography - for the next 13 years . . .Marcus who was born in Germany 1970, Simon, in 1973, while I was working at Baas Manor Farm - my first job in Horticulture - and Carla, in 1979, while i was working for Baby Bio (PBI)

Horticulture has lasted me ever since - working, advising and teaching, for (at the moment) 44 years - which is how I arrived at those qualifications quoted at the top of this page!!

And that is where I am now - still a Horticulturist but officially retired for 11 years now, but casually working at what I love best, giving talks and advice on gardenng.